Being a student-athlete requires time management skills, but for Adelphi University senior first baseman, Christina O’Hara, it also means struggling with a painful and debilitating disease.
It started with pain in her legs last April. This quickly spread to her hips, to the point where she had difficulty walking. At first she was treated with cortisone shots for the joint pain and while it did help initially, it didn’t last long. “I received a total of nine shots in the hip and groin for the inflammation, but it only worked for about a week or so,” O’Hara said.

In all, she went to about seven different doctors, including an infectious disease specialist when it was thought that Lyme disease might have been the culprit. Finally, a rheumatologist sat down with her and went over all her symptoms. “She asked me if I was sleeping well and I said no and if I had lost any weight recently and I had, about 25 pounds,” O’Hara said.
Added to this was Christina’s initial concern of psoriasis, which began about three years ago. Extensive blood work confirmed the diagnosis, with inflammation rates off the chart. Based on this information the correct diagnosis was finally made.
In November 2008, Christina was diagnosed with Psoriatic Arthritis, a disease characterized by joint weakness and is often seen in combination with skin that is red, dry and scaly. For Christina, it primarily affects her hips, shoulders and thumbs.
The disease is usually seen in someone twice her age – part of the reason the diagnosis may have been overlooked. “The psoriasis started about three years ago, in my scalp, but began to spread throughout my body especially on my back, chest and arms.”
Christina is now being treated weekly with Enbrel, a medication to reduce the symptoms of arthritis, such as joint swelling, pain and tiredness, which she self-administers with injections in her thigh. She also takes an anti-inflammatory to help with swelling and pain. However, there is always some discomfort and playing softball everyday is not making things better.
Before Christina was properly diagnosed, she missed the fall season due to excruciating pain. In fact the pain was so bad that she could barely walk. This led to back problems due to her compensating for the pain in her hips. “The summer was miserable,” O’Hara said. “I didn’t want to go anywhere because I would get so tired and it was difficult to walk.”
Christina said the doctors couldn’t really explain how she came to have this disease, but genes can play a role. People with psoriasis have a higher rate of arthritis and stress exacerbates the condition. Her rigorous schedule does not help.
In addition to being a starting first baseman on the Adelphi softball team, Christina is a double major in physical education and health. Now in her senior year, she is student-teaching as well.
A typical schedule includes student-teaching from 7:30 a.m. to 2 p.m. at Salk Middle School in Levittown. Then it’s practice from 3-5 p.m. And on some nights she has classes from 6-10 p.m. “If it’s a game, I won’t get home until after 8:30 p.m. and then I am up at 6 a.m. to start all over again.”
Playing first base is the best place for her. It’s mostly front and back movement. “It’s the lateral [movement] that gets you. So it’s better to be here than at other positions. Just throw the ball to me and I’ll catch it,” O’Hara said.
Christina is just playing through it. She admits though that the weekly injections, which she takes on Tuesdays, begins to wear off and makes it challenging. “By Sunday or Monday of the next week, my body really needs it.”
But she seems to be doing quite well. She has started in 39 of 42 games and currently has a .989 fielding percentage with 259 putouts. She is batting .278 but just two weeks ago, she blasted four homeruns in three straight games, including two in a conference win over Queens College.
An impressive week for most but even more so for Christina, who has endured so much over her athletic career.
This isn’t the first setback for Christina, who missed her freshman season due to knee surgery. Because of this, she does have another year of eligibility but she doesn’t plan to use it. “It will be too hard on my body. Plus I came in with the other seniors and I want to leave with them too,” she said.
She credits her teammates and her family with getting her through. “My teammates are my best friends, especially the seniors. They are always there for me and even take me to the doctor when I need them to.”
She shares an off-campus house with Jess Vogt, Angela Martin, Diana DiPiano and Kristin Brennan.
Christina, who is an only child, also expressed her love and gratitude to her parents for being with her every step. “They have been great and really supportive,” she said. “The doctors are convinced that my condition should start to improve after softball is done, but in the long run, hip replacement is a possibility.”
Without the daily stress of softball on her body, she should be able to cut back on the amount of treatment needed.
Christina plans to pursue a career in education as a teacher. Her student-teaching should be done in early June and she is actively searching for a position.
And so she continues on with the hope that not only will her team advance into the NCAA tournament, but that she will continue to fight. Not an easy life, but she’s not about to change it. “I am getting through it,” Christina said. “It’s not an option to quit.” 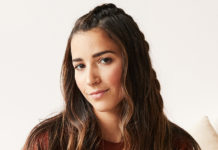 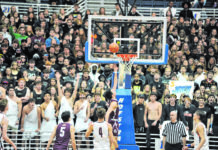 Painful Loss For Trojans In Class A Final