of the terrorist attacks

To commemorate the 14th anniversary of the September 11, 2001 attacks, Garden City Volunteer Firefighters held a remembrance ceremony at the village’s 9/11 Memorial on the village green to pay tribute to the fallen members of the Garden City community.

“No words, no ceremony, no plaques or stones, no amount of tears will ever replace your losses. This remembrance service cannot replace your losses. What this memorial can do is provide you—whether you lost a husband, a wife, a parent, a child, grandchild, brother, sister or friend – with a solemn place to remember and mourn, reflect and move on each in our own way,” Chief Joseph Nadolny said. “Let this memorial provide all of us here in Garden City with a daily reminder to take nothing for granted, appreciate our freedoms, count our blessings, strive to help our fellow man and cherish our friends and families. And let this memorial serve as a reminder of the American spirit, which burns in all of us.”

Mayor Nicholas Episcopia thanked Fire Chief Nadolny and the Garden City volunteer firefighters for conducting such a touching ceremony. “It was a very moving experience and assisted many of us to get through that difficult day,” he said.

The names of the 23 residents who perished were read during the ceremony. Their names are etched in the memorial monument stone on the village green: 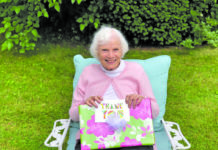