Last week, MTA interim executive director Veronique Hakim issued a letter to State Senators Kemp Hannon and Elaine Phillips, who represent Garden City, and New Hyde Park and Floral Park, respectively, in which it committed—in writing—to the promises that had been previously communicated to the Villages with regards to the proposed Third Track Expansion Project.

The letter summarizes the commitments that the LIRR Expansion Project team is making along the project corridor. The listed commitments were the result of hundreds of hours of discussions over the course of 16 months with officials from Garden City, the Villages of Floral Park, New Hyde Park, Mineola and Westbury as well as the Towns of Hempstead, North Hempstead and Oyster Bay, and Nassau County.

The board of trustees believes that because it chose to talk to the MTA/LIRR instead of merely complaining about the proposal, the village’s concerns are being more fully acknowledged and addressed. “We are committed to lessening the impact of, or removing, as many problems as we can,” Mayor Brian C. Daughney said.

A copy of the letter is below (click to read): 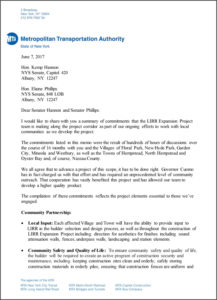 Getting Ready To Learn