March is Colon Cancer Awareness Month. To this end, Garden City’s Gastroenterology Associates (GA), PC, is once again doing its part to heighten awareness of this highly preventable disease, which will wind up with 100,000 patients receiving new diagnoses of it in 2018, with another 50,000 succumbing to colon cancer this year. Patients, staff, friends, family and local officials, including Congresswoman Kathleen Rice, came out to this 12,000-square foot outpatient procedure facility to hear those directly and indirectly affected by colon cancer advocate early screenings and detection for what has become the third most common cancer in the United States and the second-leading cause of cancer death. Dr. Leonard Stein, who is a GA partner and medical director for the Long Island Center for Digestive Health, stressed the need for this kind of advocacy.

“A colonoscopy is the procedure that no one wants to have for lots of reasons but we do a lot of good by screening people at the appropriate time,” he said. As has been the case during prior GA events, patient testimonials gave greater weight to the importance of early detection and how the center helped them get through this very trying time. Kim Burrell-LaFrank flew in from Florida and shared her experiences with cancer. What started with her mother first being diagnosed with stomach cancer in 1975 led to her enduring several surgeries before succumbing 11 years later. Burrell-LaFrank herself had her first colonoscopy at age 35, where several polyps were found to be benign and subsequently removed. She continued going for screenings over the next couple of decades, with benign polyps being routinely removed. A five-year gap between procedures due to an insurance mandate found her being diagnosed with colon cancer at the age of 60 when she did return for a colonoscopy. Genetic testing that came with her diagnosis revealed her to have Lynch Syndrome, a genetic disorder she inherited from her mother that put Burrell-LaFrank at risk for cancers such as colon, rectal, stomach, small intestine, liver, gall bladder, brain and prostate. The three biopsies luckily came back as being cancer-free. This stroke of luck reinforced the need for early detection.

“As a Lynch patient, you need to be diligent about your yearly screenings. For me, those screenings are a constant reminder of how fragile life is. And to all of you who are here tonight, if cancer is in your family, be sure to let your doctor know. If you’re 50, get a colonoscopy. Colon cancer is survivable if it’s detected early,” she said. “Like all of us, I have no idea of what my future holds. But I can tell you that in spite of my Lynch diagnosis, colon cancer, Stage 1 breast cancer and a strong potential for losing sight in my left eye due to glaucoma, I am grateful to be alive.”

Jean Ciszak was another speaker. Ciszak’s mother died while undergoing a routine colonoscopy, resulting in the family having a natural aversion to this particular medical procedure. It was not until Ciszak’s brother was diagnosed with colon cancer that was successfully treated that Jean decided to get a colonoscopy. The doctor found a cancerous mass, which was successfully removed and made the mother of two a convert to early detection. It’s a message she tries to hammer home to her friends.

“I have very dear friends of mine who even to this day, if they’re having stomach problems or anything, I tell them that they really should have a colonoscopy. And they’ll say, ‘No one is doing that to me.’ But you know, it’s not cute or funny. They are grown adults and they should get this done because it can be prevented, but people just don’t see it that way,” she explained. “And they actually use my mother as an excuse and say that she died during a colonoscopy. But I’m alive because of a colonoscopy. You have to look at the other side of the coin. Common sense has to take over. I’m an advocate of people having colonoscopies. It can save your life. It saved mine. I have a beautiful grandson who I look at and if I didn’t have a colonoscopy, maybe I wouldn’t be here today looking at him and I’m very grateful for that.” 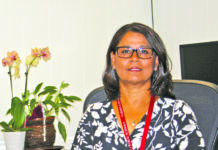