“We’re here to honor Tom Skinner, our past chief, and I can tell you from a personal basis, Tommy has been nothing short of excellent in the way he has performed his duties and above all, the way he has carried himself within the village as a well-regarded neighbor and a resident,” said Mayor Mike Onorato. “I want to thank him personally for all the work and service he has given to this village.”

Trustee Carole Schafenberg drew laughter from the crowd at the board meeting with her own tribute to Skinner:

“Tommy, can you change a smoke detector? Yeah, I’ll be right up.

Tommy, can you assist a neighbor with mowing their lawn? Yeah, give me five minutes.

Tommy, can you organize the 4th of July parade? Been there, done that many years. No problem.

Tommy, can you rebuild the gazebo at the Stewart Manor Country Club? Right on it.

Tommy, and don’t forget to drive around at night and protect your neighbors.

Tommy, a true neighbor, a friend, concerned resident, and the most dedicated fire chief I’ve had the privilege of knowing.”

For his part, Skinner was humbled by the commendation.

“Thank you very much for the appreciation,” he said. “It was my pleasure to serve this village. I’m still going to be here. I’m not going anywhere, I’m just not the chief anymore but I’ll still be at your doorstep when you make the call. I’ll be showing up in one of those pieces of apparatus.”

Skinner expressed reciprocal appreciation for the mayor and trustees.

“[The board has] helped us keep this village safe by funding us properly so that our men and women who are in this department can be well-equipped and safely equipped to do their job, and the other night is proof of that,” he said, referring to the devastating fire that destroyed an Argyle Road home on May 2.

Skinner is succeeded as chief by Fred Powell, and Mike Powell succeeds past Assistant Chief Ronald Sopp, who served as Skinner’s assistant chief for three years after holding the chief position for two years. The new chief and assistant chief, who are brothers, were sworn in on April 17. They both also held chief positions in the past.

“The department is in good hands, and [the May 2] fire is proof of that,” Skinner said. “I worked closely with them at the fire and I wouldn’t have done anything different, goes back to our incident command training needed to be a chief.” Indeed, the SMFD, along with the many other volunteer departments that responded to the Argyle Road fire, saved the neighboring homes from catching fire, especially considering the high northerly winds that day.

“My hat goes off to all the members and the chiefs and the officers of this department,” Skinner said. 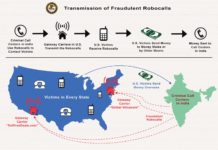