After 90 years of having paid firefighters on call, the Village of Garden City ended that chapter of civil service when the board of trustees unanimously ratified a Stipulation of Agreement between the Village of Garden City, the Professional Firefighters Association Local 1588 and current and former union bargaining unit members. With an all-volunteer department taking on first-response calls, the board expects to save roughly $2 million dollars. What started out with the board voting to abolish the paid/career part of the fire department during a July 25 public meeting instead found the board rescinding this vote in exchange for the union dismissing a lawsuit stopping the abolishment of these paid positions.

“Part of what was important to resolve for the village was all outstanding litigation. All those are deemed settled, withdrawn as a result of this global agreement,” said Labor Counsel Christopher Kurtz of Bond, Schoeneck & King, PLLC.

It was an overall decision Mayor Brian Daughney was comfortable in making for the sake of the village.

“The board of trustees strongly believes that the settlement is in the best interests of our residents for both safety purposes and for financial purposes and that is why we negotiated it and unanimously approved it. We have removed protocols and work rules that had been forced upon the village that required us to artificially hold back response of qualified firefighters who just happened to be volunteers,” Daughney said. “The board was also very concerned, and has been for some time, in regaining both financial and operational control of the workplace. In the long term, the savings from elimination of the paid contingent will free up millions of dollars, allowing us more financial freedom to make choices in the future on infrastructure, capital projects and taxes.”

Both the Union and all 12 members of the paid contingent executed a global settlement of all outstanding issues and past and pending arbitrations and litigation, including the lawsuit filed recently by several residents in Nassau County Supreme Court which has been withdrawn by the plaintiffs. The settlement removes the potential for future litigation and allows the village to regain total control of the operations of the fire department and the provision of fire-related services. This includes the removal of all prohibitions and restrictions regarding first-line response and exclusivity. The obtaining of full control of fire operations includes the right of the village to deploy any firefighter to any fire event and to utilize all fire equipment and apparatus at any time. The settlement provides all staffing and manning decisions within the control and discretion of the village through its volunteer fire chiefs. The agreement allows the village to proceed with an all-volunteer fire force like virtually every other community on Long Island.

Per the agreement, seven paid members retired in August; two members resigned effective Aug. 30; two members (union president TJ Michon and union vice president Michael J. Morgan) were placed on administrative leave and remain on administrative leave through their respective retirement dates or the last day of the month in which they each reach 20 years of service with the New York State and Local Retirement System, whichever comes first; and one inactive member (Vincent T. DiBona), will remain on disability leave until he either receives disability retirement or until he hits his 20 years of service to the village.

Numerous economic issues that had been in dispute were settled, including retroactive pay amounts based on annual raises for past years of 2 percent per annum. The union had been without a contract since 2011. These amounts for prior years had been included in all prior years’ budgets. In addition, in consideration of early terminations and retirements and other waivers of potential claims, and to avoid future litigation, additional payments will be made to the individual union members.

In the end, the union will cease to exist as the agreement requires it to disclaim representation interest and rights, be decertified and no longer be able to represent former members. No future union can arise as the settlement provides that neither the union nor individual members will engage in any activities to disrupt the provision of goods or services from third parties to the village or the recruitment of additional volunteers.

Michon issue a statement on behalf of the career firefighters that read, “Although it is a difficult decision, the professional fire fighters and the village have reached an amicable solution to the ongoing disputes. It brings closure to the issue for both sides and more importantly for the citizens. Your Garden City Professional Fire Fighters, both past and present, have been honored to have protected the residents of this great community.”

A petition that would have had residents put the resolution to retain paid firefighters on a village-wide referendum vote prior to this agreement being reached was neither mentioned nor acknowledged. The Stipulation of Agreement can be read in its entirety at www.gardencityny.net. 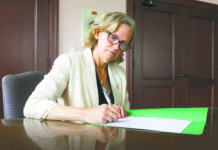