The Town of Hempstead Town Board put an official end to a litigious chapter in its recent history.

On Oct. 3, the town struck from its books a provision in the building code requiring service stations to provide free air to drivers needing to inflate their tires. By once again allowing coin-operated compressed air dispensing machines, it also formally settled a class-action lawsuit that reportedly cost it at least $75,000 in outside legal fees.

The 6-1 vote, with Councilman Anthony D’Esposito dissenting, brought to a close a legislative tale that began in 1978, when the town introduced the original law.

In 1983, William McCabe Sr. of Floral Park founded Service Station Vending Equipment to manufacture and install coin-operating air dispensing machines across the region. He soon discovered that stations in the town carrying his equipment were receiving occasional summonses.

McCabe told Anton Media Group that the ’78 law was “under the radar” and not totally enforced.

“In 1991, I worked out a proposal with the town to provide a sticker on the machines that stated that [in an emergency or lack of money, the station] would provide free air,” McCabe told the town board at the Aug. 7 public hearing to consider amending the law.

“That worked for 25 years, until the previous supervisor decided he didn’t like that. As a result, it led to very costly, very lengthy litigation.”

In 2016, then-Supervisor Anthony Santino, responding to what he claimed were complaints from constituents and to enhance safety, introduced changes to §336.G(3) of the Building Zone Ordinance, “Gasoline Service Stations.”

The amendments reaffirmed the 1978 law and tightened the loophole that, in Santino’s view, allowed stations to evade the free air requirement. In addition, they subjected station owners to criminal charges, including imprisonment for up to 15 days, and stiff fines for having coin-operated machines on their premises.

One amendment, subsequent modified in March 2017, would have required free air 24/7, and imposed fines if the equipment was damaged and inoperative—even during the hours that the facility was closed.

The lawsuit argued that the requirements “constitute an unauthorized use of zoning and police powers to micromanage small businesses; and…violate the plaintiffs’ civil rights, state and federal constitutional rights, including their rights to due process, equal protection, and constitute an impermissible and unauthorized taking.”

In January, Supreme Court Justice Karen Murphy ruled that the town could not enforce its regulation, stating that it conflicted with state law.

This past July, the town introduced an amendment to the ordinance allowing once again for coin-operating machines and reducing the fines and penalties for violation of the law. It required that, under defined emergency conditions, the station had to dispense air for free, and a sticker stating such had to be prominently displayed on the machine. 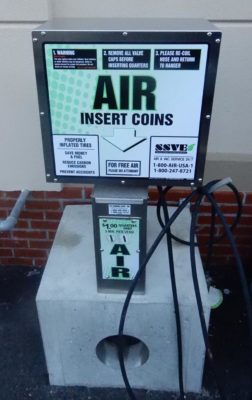 Numerous people commented on the proposed amendments at the Aug. 7 meeting.
McCabe Sr. said that the law made it hard for him to do business in the town and cost him money. Many drivers, he claimed, did not pay to use his machines.

His firm employs 35 people and a number, he pointed out, lived in the town.

McCabe stated that machines are installed and maintained at no cost to service stations and he splits the income with the station owner. Machines are available for customer use 24/7 even if the facility is closed. They cost $2,500 to make and install and sometimes at least that much to maintain/repair throughout the year.

McCabe mentioned how quickly they get fixed when broken or replaced when, as often happens, they are struck by vehicles.

His company is developing new machines that will accept credit cards and smartphone options.

Councilman Bruce Blakeman asked, “Mr. McCabe, are you in favor of this law?”

McCabe: “It’s a workable solution, but I think at the end of the day, any free air mandate is problematic.”

Blakeman: “But this is better than it was previously, right?”

McCabe: “Somewhat. But I’m making a case [against any] free air mandate.”

McCabe called the legislation “outdated and no longer needed.”

The businessman detailed how, in an effort to avoid litigation, he had offered the Town of

Hempstead 18 air machines at no cost to the town, to be placed on town property for public use. That offer was rejected under the Santino administration.

One of the amendments to the law increases the size of the sticker telling customers that they can get free air under emergency conditions.

Observed McCabe, “There’s no reason why folks can’t get air in an emergency, and my machines are available 24/7.” 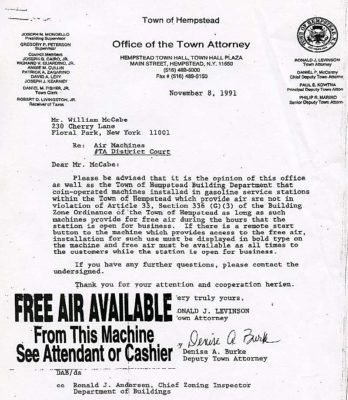 Bill McCabe Jr. of New Hyde Park followed his father to the speakers’ table, and said, “The law being voted on today is suitable, and works for the industry to some extent. And it’s arguably much better than being restricted by what the former supervisor wanted. I urge councilmembers to pass this law,” reminding them that gas stations are small businesses struggling to pay $80-$90,000 a year in property taxes on 2-3 cents profit margins per gallon of gas sold.

McCabe added, “The machines are safe, properly regulated and properly maintained by outside companies providing the service to the station.”

Blakeman again interjected, “Mr. McCabe, a wise judge once told me as a young attorney that, ‘When you are winning your case, you should rest your case’.”

Blakeman: “You’ve made your point.”

McCabe: “I hope that’s the case, and I appreciate everyone’s support today.”

Chris Daniello, the executive director of the LIGRA, noted that the organization opposed the law as amended because when it was enacted in 1978, the technology did not exist to warn motorists about low tire pressure.

In 2007, the federal government mandated that every new car would have a tire pressure monitoring system.

“When that [tire pressure] light goes on, it means the pressure has dropped between 14 and 25 percent, which gives you ample time to bring your car somewhere and put air in your tire , so it’s not an emergency that you have to get somewhere right away to fill your tire,” Daniello explained. “That’s why we’re opposed to forcing stations to provide free air, because it costs them to maintain that equipment.”

Carol A. Hoeffner owned a three-generation service station in Valley Stream and emphasized the plaintiffs’ assertion that the law needlessly punished small businesses.

New York City-based attorney Erica Dubno represents the plaintiffs in the lawsuit against the town.

“We do not believe, as my clients have all mentioned, that the law is required in Hempstead because it’s preempted or at least governed by state law,” Dubno said.

She reminded the town board, “There’s a lawsuit pending and the judge has found in our favor twice now. The judge, Karen Murphy, granted us a preliminary injunction enjoining the town from enforcing the law based on her belief that we have the likelihood of success based on our argument to the pre-emption doctrine.”

She added, “Without leaving any claims that we have in our lawsuit, we do believe the [amended law under discussion] is a compromise. Going back to the 1978 law and the 2017 law, both of which banned coin-operated machines, is improper and there’s no basis for it.”

Dubno said the plaintiffs supported this resolution, noting, “What it does is reduce the fines and penalties that can be imposed under the current law. Small business owners can receive a fine of $1,000 for the first violation $10,000 for a third violation within a 5-year period of time. They could also receive 15 days in jail for someone paying 75 cents for air.

Under the proposed resolution those penalties are substantially reduced. So we think they might accommodate our Eighth Amendment claim, which relates to cruel and unusual punishments and excessive fines.”

Dubno concluded, “We’re here to work with the town. We want to do everything we can to try to resolve this issue. We think it’s costly litigation. The town has already paid tens of thousands dollars to outside counsel to litigate it. but we will continue to litigate it, unless something changes.”

Blakeman asked, “I thought if we passed this, it would settle the litigation.”

“That is correct,” Dubno replied.

Lawrence Culley, counsel for the GASDA, asserted, “We believe that state law requiring the provision of air to motorists pre-empts the Town of Hempstead law.”

He also mentioned what he labeled “the draconian fines that could be levied on small businesses” under the unamended law.

Felix Procacci of Franklin Square stated, “Even with this emergency exemption (amendment), it still pre-empts state law—there’s no getting around that.”

He criticized the town for spending money needlessly by defending the law when it knew it would lose in court.

Former Supervisor Santino, via both a statement and a tweet, stated, “Regrettable that Laura Gillen reversed the change in Hempstead Town code I authored requiring gas stations provide free air for car tires. Hempstead Town is taking a major step backwards by permitting the continued use of coin-operated tire inflation machines. The next time a parent with young children, a senior citizen or handicapped resident has to go into a gas station to ask where the ‘secret button’ is that operates the air machine without coin deposit, they should remember the name Laura Gillen. Gillen is the leader of America’s largest township who sided with corporations and gas stations over our residents….[T]his happened after she took thousands in campaign contributions from vendors who profit from selling air to motorists.”

“It’s a station’s responsibility to give quarters to the folks—but who’s to determine what’s an emergency?” McCabe Sr. told Anton Media Group. “I hope it doesn’t get abused.”

McCabe said he hopes to lobby the state government to strengthen the state law, which allows stations to charge for air.

“We needed to get this behind us, so we can move on with our lives,” he said of the legal battle.

In addition to the constitutional issues argued by his lawyer, McCabe had a simple view of the old law’s unfairness: “It’s not the government’s business to be in people’s business.”