It’s been approximately five months since NYU Winthrop began offering ambulance service in the village and the partnership has been positive for both the village and the hospital.
Justin Burke, director of external affairs for NYU Winthrop, provided an update on the frequency and nature of service calls between Jan. 7 and May 17. During this time period, ambulance crews responded to 658 calls, 71 percent of which were for chest pains, shortness of breath and/or fainting. Secondary calls were trauma-related involving falls and motor vehicle accidents. Further, crews performed 523 transports to area hospitals during this same time period.
“I think this has been a great partnership. We are very happy with the way things are going and we can only hope the community is as happy as we are,” Burke said. “We’ve been neighbors for over 100 years and it’s great to be so entrenched at this point in time.”
Mayor Theresa Trouvé agreed, adding, “I think your presence here in the village makes people feel very secure.” 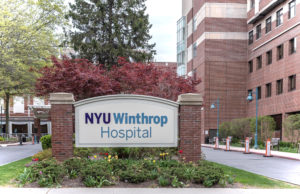 The two-year agreement with NYU Winthrop provides service 24 hours a day/seven days a week. Two new ambulances fitted with brand new equipment each have one EMT and one paramedic aboard. Ambulances are stationed at the St. Paul’s campus. The switch to a private service provider was one of the items on the board’s priority list adopted in 2017. The Village of Garden City Police Department has radio connectivity with the ambulances. In addition, two microphones/speakers were installed for efficient dispatching between police headquarters and each ambulance unit.

Commissioner Ken Jackson, who has firsthand experience with the transition, said his officers are thankful for the support.
“We work side by side,” Jackson said. “My officers have been very appreciative of the help they are getting. I’ve seen the ability they have on serious aided cases and they do a tremendous job.”