On the evening of July 12, Garden City stood in solidarity with more than 700 other vigils across the country to denounce inhumane conditions in detention camps at the U.S. southern border. Instead of spending their Friday night at the Seventh Street Promenade or seeing Toy Story 4, several hundred residents gathered at the Unitarian Universalist Congregation of Central Nassau (UUCCN) to listen to local leaders speak and to hold a candlelight vigil at the busy intersection.

Elizabeth Gonzalez, worship arts chair of UUCCN, began the event called Lights for Liberty: A Vigil to End Human Detention Camps by thanking attendees “for being here…to take a stand against the horrific atrocities and human rights violations that are being carried out in our name right now.”

She continued, “The flaming chalice represents many things to Unitarian Universalists. It represents the light of truth and the light within each of us. And so…we will be lighting up the corner of Stewart Avenue and Nassau Boulevard tonight to shine a light on the atrocities being committed against asylum seekers and refugees and to bring light…to the darkness of our world.”

Gonzalez said that she invited representatives of the neighborhood, including Town Councilman Thomas Muscarella, Mayor of Garden City Theresa Trouvé, Town of Hempstead Supervisor Laura Gillen, County Legislator Laura Schaefer, Nassau County Executive Laura Curran, State Assemblyman Ed Ra, State Senator Kevin Thomas and Congresswoman Kathleen Rice, and that she was told they had prior engagements. Mayor Trouvé did not have a comment about the vigil. 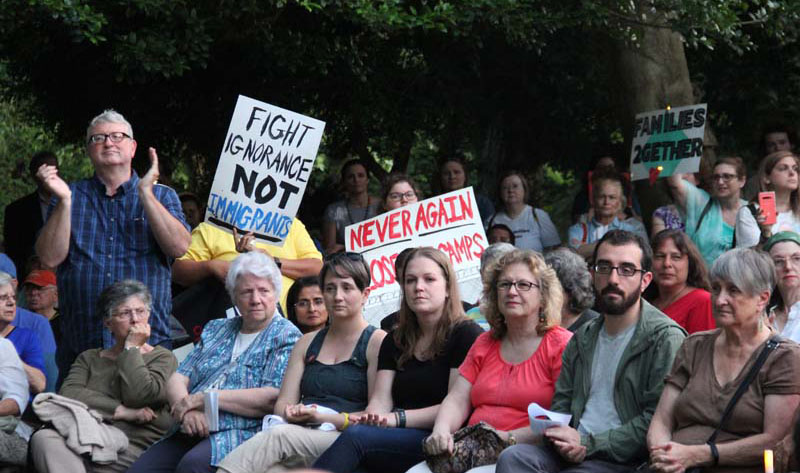 Assemblywoman Michaelle Solages accepted the invitation. Gonzalez said that Solages is “a strong advocate and dominant force within her community.” Solages was recently appointed chair of the Task Force on New Americans and serves as first vice chair to the New York State Black, Puerto Rican, Hispanic and Asian Legislative Caucus.

Solages said that she could not stand silent while children are abused at the border.

“For all the elected officials who are staying silent, who think that…this is too politically dangerous for me to say something, shame on you,” she said. “I could be home with my 9-month child…but I cannot be silent. And so I call on the federal legislators, especially here on Long Island…to stop funding this agency that is raiding our community—ICE—to stop giving these terrorists, as I call them, funding.”

Richard Koral, leader of the Ethical Society of Long Island, began by asking the crowd to imagine if compassion ruled U.S. policy.

“The practice of hospitality is one of the most ancient features of a civilized life,” he said. “This is breaking one of the most basic rules of civilization, to shun people in their hour of need. These are refugees. These are asylum seekers…These are people who are suffering and who are escaping situations that we helped create.”

“I was taught to be very proud of my background like I’m sure many of you were taught to be proud,” she said. “What the Trump administration is doing to demonize these people is wrong….They are coming here seeking asylum. They are coming here to make a better life for themselves, just the way our families came to make a better life for themselves.”

Following the prepared speeches, Long Island resident Karin Barnaby asked to say a few words. She told the audience that she emigrated from Germany when she was 3 or 4 years old in the 1940s.

“I was put in an orphanage, just for a month or so. I did not speak for a whole year. I don’t have a memory of it,” she said, adding that the children in camps are experiencing unimaginable trauma.

She concluded, “I have always been proud of choosing America as my country. I am now becoming more than ashamed of America, and I am fighting like hell to change [that].”

Visit longislandweekly.com for the full article.