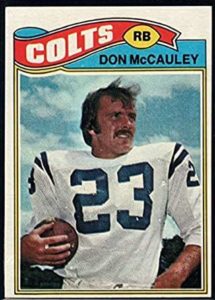 Don McCauley is inarguably the greatest football player to ever strap on a helmet for the Garden City High School Trojans. His accomplishments have landed him in a number of Halls of Fame including the College Football Hall of Fame (2001) and the North Carolina Sports Hall (2016). And in 2017, he was inducted into the Nassau County High School Athletics Hall of Fame. Although he was a defensive back in high school (in addition to playing catcher for the baseball team), McCauley was converted to running back after he was recruited by the University of North Carolina. It was here that he was a two-time First Team All-Conference selection. a two-time Conference Player of the Year, was recognized as the 1971 ACC (Atlantic Coast Conference) Athlete of the Year and surpassed O.J. Simpson’s single-season NCAA rushing record along the way. He was the Dolphins’ first-round draft pick, only to go to the Colts after NFL Commissioner Pete Rozelle penalized Miami for tampering after they wooed Coach Don Shula from Baltimore, McCauley wound up playing 11 seasons for Baltimore before retiring. Through it all, he’s remained humble and grateful to have grown up in Garden City.

“Just how fortunate I was as I get older to look back on what the community had to offer. It always surprised me to see how willing everybody was to give to the athletes and to the students. It’s a model neighborhood. I loved it and I couldn’t think of a better place I could grow up in on Long Island,” McCauley wistfully said.

As the second oldest of five siblings (three sisters and one brother), the septuagenarian gridiron great grew up around the corner from Susan Lucci and John Tesh. Childhood friends he remains close with include Bob Franz, Phil Faulk and Bill Kavan. McCauley also has early fond memories of playing community sports right up through high school.
“I was nine or 10 years old when I played Little League Baseball with the Doubleday Orioles. I played Little League Football with the Garden City Rams at about the same age. I remember my dad was one of the coaches with Jerry O’Brien, who I can remember was one of our coaches,” he recalled. “I remember playing at Garden City High School under Warren King and Chuck Riffo. What I most remember was how well we were coached and the support of the community. We had really good teams. I was more of a defensive back than I was a running back. We had a great running back named Rick Frisbie. It’s funny because he went to Harvard and they made him a defensive back and when I went to the University of North Carolina, they made me a running back. So we kind of switched positions.”

McCauley’s non-football life included working with Kavan as a restaurant owner, running eight or nine eateries over the span of 20 years including McCauley’s, Spencer’s, 661 and Gleason’s. The proud father of three daughters, he decided to relocate down to Chapel Hill, NC, with his wife Tracy, where he became involved with his alma mater. After a stint working at the Kenan-Flagler Business School in development, he shifted over to the UNC Athletic Department, a position from which he retired two years ago. While McCauley still consults as an advisor to the football team, he still enjoys returning to Garden City every few months.
“I have so many wonderful memories about the village and what it had to offer. How lucky were we to grow up on Long Island in such a great neighborhood?,” he said. 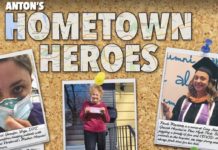