When New York Times best-selling author Nelson DeMille was tasked with finding a co-author, he wound up not having to look very far. For his latest novel, The Deserter, the elder DeMille reached out to son Alex, who’d been plying his trade in the world of film as a screenwriter and director. Having changed publishers to Simon & Schuster, part of Nelson’s new deal was for three solo books and three-authored titles for what would ideally become a series. A contest was initially held and the winner (who DeMille declined to name) who was picked got as far as penning a draft with the established author. The Deserter’s fictional premise is based on the real-life exploits of Bowe Bergdahl, a United States Army soldier who was held captive by the Taliban from 2009-14 after he deserted. And while DeMille admits the anonymous scribe was good at his craft, the two didn’t gibe. At that point, DeMille reached out to son Alex.

“The guy was a good writer and there wasn’t anything wrong with him. But he wasn’t quite getting the military characters,” DeMille explained. “After that, we didn’t know where to go. They told me to pick somebody, which I said I wasn’t going to do. I let it go for a while and then this popped into my mind. I thought it would be right for Alex because he’s a screenwriter and he knows how to structure a story.”

While the younger DeMille had crafted his writing skill in the world of cinema, he didn’t immediately jump on his father’s offer.
“I wasn’t sure I wanted to do it or if I could do it. How bad would it be if I did it and I turned in a stinker?,” Alex said. “So I thought about it. I wanted to make sure I had an idea before we moved forward. [Screen writing and novel writing are] related but I knew this would be my life, at least for the duration of the book. It was going to be a full-time thing and not a side project. I have confidence in myself as a writer, but I don’t necessarily write the kinds of stories that my dad writes. And I obviously don’t write novels, so I wasn’t sure. Then he told me I could do it.”

The two got started in late summer 2017 and had the project wrapped up by February of this year. The DeMilles went with having protagonists Scott Brodie and Maggie Taylor, a pair of CID (Criminal Investigation Division) officers, track down Captain Kyle Mercer, a former member of the Army’s elite Delta Force who had deserted his Afghanistan post, was captured by the Taliban and after escaping, decamped to Venezuela, leaving a trail of dead security assets in his wake. The book’s pace is brisk and descriptions of the Venezuelan urban landscape and countryside make the reader feel as if they’re riding along with Brodie and Taylor. It’s all the more impressive when you learn neither DeMille set foot in Venezuela to get this kind of detail. And also that DeMille the elder was working from his Garden City office, while his son was doing the same from his home in Brooklyn. Email proved to be the conduit for the back and forth between the scribes. 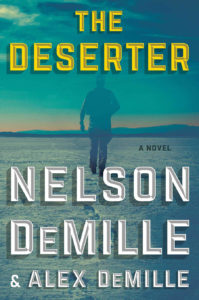 “We didn’t know how to do it logistically at first. I was working on my book. We sent out the first draft. Logistically, it was a little easier because I could email Alex,” Nelson said. “Last time I co-authored was 1977 with Tom Block on a book called Mayday. Tom, at that point, was a U.S. Air pilot based in Pittsburgh. I had to go to the post office every day to mail chapters back and forth. We thought overnight mail was the greatest thing going.”
He added, “Alex would email me the chapters. I don’t like to read off the screen, so I’d print them out and the process made it easier for me to read. It did two things. One, was doing line editing I could do, scan and send back to him. The more major stuff, like the inserts, were typed here. Then he did what amounted to a third draft and I would do another read. Alex had the final cut.”

Nelson credits his son with the authenticity the Venezuela segments resonate with. It’s a facet he’s tried to incorporate into his earlier books.
“As an author, you certainly feel better about having been to a place. When I wrote The Cuban Affair, I started writing things about Russia,” he said. “I hadn’t been there, but I knew I was going. About half the book was done and I went to Russia and realized I didn’t know Russia at all. The stuff I’d read, people I’d spoken to—guys from the New York Times who’d been in Moscow for six months. It didn’t matter. I wasn’t there. Those weren’t my experiences. I had to go back and do all these rewrites. It gives you the confidence you need. Otherwise you’re making it up and become an armchair writer.”

With the duo set to write a sequel set in Berlin, the younger DeMille has embraced his experience in novel writing, a big part of which he attributes to the positive experience he had with his father.
“It’s nice versus writing a script, which is a whole other mechanism that comes into play as far as how you’re getting feedback and why you’re getting the feedback that you’re getting,” Alex said. “This process felt honest and everybody is trying to get a good book. There’s not a million other factors at play.”