The Nassau County Police Department’s Eighth Squad arrested a Hempstead man for a robbery that occurred on Tuesday, June 2, at approximately 1:30 p.m. in Levittown.

According to detectives, units responded to Home Depot located at 3350 Hempstead Tpke. for a larceny that had just occurred. An unknown male subject had entered the store, taken items from the shelves, left the store without paying for the items and pushed a Loss Prevention officer on the way out. Victor Rodriguez, 46, was found a short distance away and taken into custody with the assistance of the K9 Unit. Rodriguez and an officer were transported to a local hospital for injuries sustained during the apprehension.

Rodriguez is charged with third-degree robbery and fourth-degree grand larceny. He was also found to have multiple open warrants and will be arraigned when medically practical.

The Nassau County Police Department’s Third Squad arrested a Westbury man for an assault that occurred on Tuesday, May 26, at 10 p.m. in Westbury.

According to detectives, officers responded to a Gordon Avenue residence for a domestic incident. Upon police arrival, it was determined that a male subject was involved in a domestic dispute with a 49-year-old female victim. The subject, Miguel Jimenez, 46, was hiding in the basement of the residence. The responding officers located Jimenez hiding in a closet. He was immediately combative, and officers placed him into custody. While transporting Jimenez to a police vehicle, he became extremely combative and began flailing his legs. He then proceeded to head butt one officer and kick the other officer. The two officers were treated at a local hospital for their injuries. Jimenez was transported to the Third Precinct for arrest processing.

Jimenez has been charged with two counts of second-degree assault, fourth-degree criminal mischief, criminal obstruction of breathing/blood circulation, resisting arrest and petit larceny. Jimenez was also found to have two open Nassau County First District arrest warrants for violations. He was arraigned on Wednesday, May 27 in Mineola.

The Nassau County Police Department’s Second Squad is investigating a burglary that occurred in Woodbury on Saturday, May 30, at 1:55 a.m.

According to detectives, Second Precinct police on patrol discovered a broken window with an alarm ringing at the Verizon Wireless store located at 8223 Jericho Tpke. An investigation revealed that an unknown subject (s) made entry into the store by breaking a side window and removing assorted cell phones on display valued at $ 5,800. The unknown subject (s) also removed a locked box that contained an undetermined amount of money that was near the register. The subject (s) fled in an unknown direction. The investigation is ongoing.

Detectives request that anyone with information regarding the crime to contact the Nassau County Crime Stoppers at 1–800-244–TIPS. All callers will remain anonymous.

The Nassau County Police Department’s Arson-Bomb Squad arrested a Massapequa man for illegal storage of explosives that occurred on Friday, May 29, at 11:55 p.m. in Massapequa.

According to detectives, units responded to a house fire at 2 Midlawn Dr. Upon arrival at the scene, it was discovered that defendant Matthew Deluca, 37, had a large sum of assorted fireworks in the garage.

Deluca is charged with illegal storage of explosives and unlawfully selling fireworks. He was arraigned on Saturday, May 30, in Mineola. 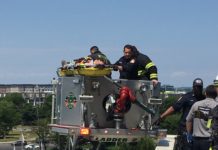