As we entered Phase III this week, the good news was that Village Hall and administrative offices reopened for in-person inquiries and business on Monday, June 22 between the hours of 9 a.m. and 4 p.m. All full-time staff returned to on-site workplaces Wednesday, June 24. However, the Senior Center and Library remain closed to the public at this time. Visitors are required to wear a face covering, maintain social distancing of six feet and sign in to a Visitor’s Log outside of the office they are visiting. Furthermore, while multiple people can enter Village Hall, only one person will be admitted into each office space at a time and are asked to abide by employee instructions.

All of our buildings have been sanitized since the onset of the COVID-19 pandemic. Additionally, proper personal protective equipment (PPE) in the form of masks and gloves are provided on an as needed basis. All reception desks have been modified to include Plexiglass panels to alleviate physical contact between visitors and employees to further the effort to stop the spread.

DINING IN THE VILLAGE

Local restaurants are open for indoor/outdoor dining and takeout. Indoor seating began Wednesday, June 24, as we entered Phase III of the region’s reopening plan. Limited reservations are being accepted at local eateries. Social distancing protocols must be followed. Tables will be six feet apart and masks will be required when unable to remain six feet apart from another patron, other than those in your party.

Opening Day for the 2020 Garden City Pool season is Friday, July 10. It typically takes staff three to three-and-a-half weeks to prepare the facility for the season. This year marks the 64th season of “fun in the sun” at the Village’s premiere facility. State regulations will require that the facility be run at 50 percent capacity, which means 639 people will be allowed at the facility at any given time. Staff is currently working on furniture layouts to set up decks that comply with social distancing protocols.

Following a Recreation Commission meeting last week, it was decided that memberships should be sold at a reduced rate. No guests will be permitted this season. Two swim sessions will be offered each day. Session A will be offered between 9 a.m. and 2 p.m. Session B will be offered between 3 and 8 p.m. The hour in between sessions will give staff appropriate time to clean the facility. D&J Refreshments is also returning for the season to offer takeout only. The indoor eating area will serve as an adjunct staff room to ensure social distancing.

Registration details are coming soon. The pool website, www.gardencityrecreation.org, will also have a downloadable brochure with details regarding the season. “It’s going to be an interesting experience the first few days, but we’re ready for it,” Paul Blake, chairman of the Board of Commissioners of Cultural and Recreational Affairs, said.

The board during its June 18 meeting ratified an $18,000 change order submitted by subcontractor Talty Construction, Inc. for additional labor and materials. This increases the amount of the St. Paul’s Window Protection bid, awarded at the January 9 meeting from $39,400 to $57,400.

In May, trustees did not ratify three change orders from Talty Construction, Inc. totaling $35,776.83, for additional labor and materials related to window protection at St. Paul’s. Several trustees expressed concern that the change orders exceeded the CNY budget of $69,000 by approximately $6,000. This increased the amount of the St. Paul’s School Window Protection Bid, awarded on January 9, from $39,400 to $75,176.83. Sixty windows were included in the bid; once crews got closer to the building it was discovered that an additional 49 windows needed attention.

Walter Beal, a project executive at CNY, participated in the May 7 board meeting via Zoom. He explained that several factors accounted for the addition–the drone wasn’t helpful in identifying broken windows; building architecture didn’t lend itself to viewing all angles of the building and the windows from the ground level; several windows were in tact but the wood frames were rotted; and other windows were obscured behind ivy. At the board’s request, Beal went back to the subcontractor to review the change orders and came back the board with better pricing.

The village’s Business District Security Infrastructure Project is 79 percent completed. Although the project has been delayed due to the pandemic, Police Commissioner Kenneth Jackson expects it to be completed by the end of July.

This past fiscal year, the Garden City Police Department expanded the project by adding cameras on Seventh Street and in Parking Field 7N. License plate readers will also be installed on Seventh Street. Cameras are already located within Parking Field 7S and in prior years, cameras were also installed in several village-owned facilities, including the Water Works building, Village Hall, Village Court, the police and fire departments and the library.

The cameras can be viewed from inside police headquarters and inside the mobile command unit. The cameras will serve as an important tool in aiding the department in preventing and solving crimes. According to Commissioner Jackson, the cameras have already proven to be beneficial in solving numerous crimes such as criminal mischief, DWI and identity theft.

The Garden City Fire Department’s chiefs and line and corporate officers took their oaths of office Thursday, June 18 during ceremonies at Village Hall. Mayor Theresa Trouvé and trustee John Delany, Fire Commissioner, did the honors. Thomas Strysko will continue serving as Chief of the Department and will be aided during the coming year by 1st Assistant Chief Devyn Moody, 2nd Assistant Chief Matthew Pearn and 3rd Assistant Chief James Taunton. We wish them well and thank them for their continued involvement. Special thanks is also extended to the families of all of the dedicated volunteer firefighters for sharing them with the village and for all of the sacrifices they make to assure that we are protected. 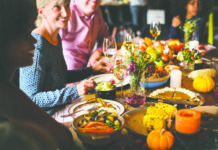 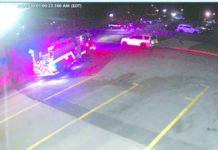 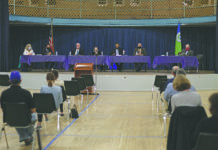