Following a six-month postponement due to the pandemic, the Village election was held Sept. 15. Deputy Mayor Robert Bolebruch and incumbent Trustees John Delany, Louis Minuto and Colleen Foley returned to office. Mayor Theresa Trouvé administered their oaths of office during the Sept. 17, 2020 Board of Trustees meeting held at the St. Paul’s Field House.

“I look forward to continuing our work together,” Mayor Trouvé said.

Deputy Mayor Bolebruch, a Garden City resident since 1995, was re-elected to his fourth two-year term. A member of the Western Property Owners’ Association for more than two decades, Deputy Mayor Bolebruch has been employed in the securities industry since 1987, and is currently branch manager at American Portfolios.  He will serve as chairman of the Finance and Audit Committee as well as a member of the Public Information Committee.

Representing the East, Trustee John Delany replaced outgoing Trustee Dennis Donnelly in 2015. He too was re-elected to another two-year term. He is a retired corporate attorney and insurance executive who earned degrees at both Villanova University and St. John’s Law School. A resident of the Village for more than four decades, Trustee Delany is a former Eastern Property Owners’ Association director, former Garden City Library Board trustee (1985-2006), serving as its chairman from 2003 to 2006, and former member of the Citizens Budget Review & Advisory Committee. He will continue serving as Fire Commissioner, as well as a member of the Zoning Change Review Committee, Traffic Commission, Legal Committee and Finance and Audit Committee.

Trustee Minuto, who replaced outgoing deputy mayor Richard Silver in 2017, was also re-elected to a two-year term. A lifelong resident of Garden City, Trustee Minuto graduated with honors from Pratt Institute where he earned a Bachelor of Architecture. After working abroad for Tommy Hilfiger in the Special Projects Group, he and his wife, Danielle, also a lifelong resident of the Village, settled back in Garden City in 2001 to raise their family. They have four children who all attend Garden City schools and are active in community sports and recreation. He currently serves as senior vice president of Global Environments at Coach, Inc. where he has held numerous escalating titles in architecture and construction for the past 16 years. Appointed chairman of the Zoning Change Review Committee, Trustee Minuto will also serve as chairman of the Traffic Commission.

Trustee Foley represents the Estates section and replaced former Deputy Mayor John DeMaro in 2018 when he did not seek re-election. Trustee Foley and her husband, Thomas, are both Garden City High School graduates and raised their four children in the Village. Trustee Foley’s long record of volunteer service includes serving on the Garden City Board of Education for 12 years, including six years as president and three years as vice president of the Board. She has also served on the PTA, SEPTA, TWIGs and Welcome Wagon. She will continue serving as the Board appointed liaison to the Garden City Library, as well as a member of the Traffic Commission, Finance and Audit Committee and the Public Information Committee.

-Submitted by The Village of Garden City 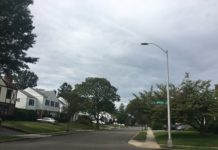 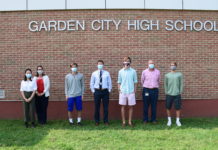 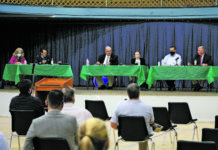 Seventh Street Extends Outdoor Dining Through Rest Of The Year