The awards were presented at Rotary’s recent lunch meeting at Calogero’s. The two scholarship recipients were previously recognized at award ceremonies held at both high schools. Conforming to criteria set by Rotary, Hughes and Mulrooney excelled in service to their communities and well beyond, and both excelled academically as well. It is the tradition of the club to host the scholarship winners and their parents at a lunch meeting following their award recognitions. Rotary also welcomed as guest speaker Garden City Police Commissioner Kenneth Jackson along with Department Commanding Officer Inspector Steven Braun.

With community service one of his biggest passions, GCHS scholarship recipient Hughes worked with the International Rescue Committee (I.R.C.), which afforded him the opportunity to transport clothing and furniture to recently-arrived refugees, and to be a peer mentor for refugees youth at their summer academy.

Hughes said his most impactful experience was going to El Salvador for mission work. The fact that villagers there had received harmful genetically modified crop seeds that severely limited their crop yield, drove Hughes’ secondary passion for environmental management.   Promising the villagers that he would come back and help them further, Hughes believes the Rotary scholarship can help him get the degree and knowledge base required to do so. He will attend SUNY Cobleskill in the fall where he will study Environmental Management.

With a class rank weighted average of 96.15, MHS scholarship recipient Mulrooney excelled academically, scoring highly in Advanced Placement, Regents, State Exams, honors and more. Throughout high school, she has spent much of her time volunteering, with the help of Mineola High School’s Student Service Center. She notes that this club has given her the opportunity to make her community a better place. The multitude of programs she was involved in also allowed her to determine which service opportunities fit best for her.

She notes that one of her major service opportunities has been volunteering at the Mary Brennan INN [International Nutrition Network] since her sophomore year.

“I help stock the food pantry with donations, organize clothing and bedding donations and donate items to help the people there [regarded as guests]. I’ve also contributed to a multitude of other tasks to help the INN run smoothly,” she added.

She will attend Sacred Heat University in Connecticut this fall. 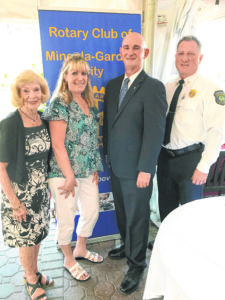 At the June 29 Rotary meeting, the featured guest speaker was Garden City Police Commissioner Kenneth Jackson who delivered a comprehensive presentation on current concerns and activities of the department.

The Commissioner reported on COVID, reform laws, scams and traffic safety. He said Garden City is blessed to have less crime in comparison to other Long Island communities and that it was down an overall 35 percent over the past two years. Commissioner Jackson noted that foot patrol is the backbone of Garden City’s Police Department in apprehending violations and lawlessness. He also emphasized the solid relationship between the department and Garden City schools noting they work closely on areas of concern, particularly educating students about cyberbullying and drug/alcohol abuse.