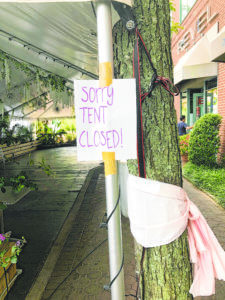 At the village’s most recent board meeting, Garden City Mayor Cosmo Veneziale wanted to dispell rumors that he is anti-business after the village told four local restaurant owners to take down their outdoor dining tents that were constructed due to COVID because they were fire hazards.

“I support all businesses that comply with the codes that provide safety and access to our residents and public at large,” Veneziale said. “The temporary revocable license agreement was first issued in June 2020 by the village. It was then renewed on Sept. 29, 2020 and ended on Dec. 31, 2020. The second extension was issued on Feb. 4, 2021 and the third extension issued on Feb. 23, 2021 to be ended on Dec. 31, 2021, which was all approved by the prior board of trustees.”

“The license agreements did not permit outdoor heaters of any kind,” Veneziale added. “The building superintendent on Jan. 22, 2021 issued an Order to Remedy to Revel for violation of New York State building code, state fire code and village code. Tents were not permitted per the license agreements. However, tent permits were used by the Nassau County Fire Marshal as an administrative action without inspection by the fire marshal.”

The prior and current fire chiefs objected to the installation of tents installed in the fire access lanes on Kellum Lane. The state fire code prohibits the obstruction of any kind including parked vehicles in a fire access lane.

“Each of the restaurants, which are using village parking lots, have previously agreed in writing to comply with all state fire code requirements and village laws to keep their outdoor dining areas safe,” Veneziale said.

The restaurants—Revel, Calogero’s, Waterzooi and Novita—were inspected by Nassau County Fire Marshals in late July of 2021. The fire marshals found that the outdoor dining facilities were hazardous fire and safety conditions that were in violation of the New York Fire Code and State Law. Because of those violations, the structures needed to be taken down immediately.

Revel faces a unique obstacle, however. During inspection, the county’s fire marshals found that Revel’s outdoor structure is blocking the entire street and fire lane—preventing fire apparatus access, and that the current structure that Revel built does not meet the requirements of the state’s 2020 Fire Code. The safety violation required the immediate removal of Revel’s tent and structure because it blocked Kellum Lane and impeded access—hindering rescue operations for the fire department at the 365 Stewart Ave. apartments and the two floors above Revel.

According to Deputy Mayor and Fire Commissioner Tom O’Brien, Revel also had numerous fire code violations within its tent and outdoor structure that can put people in harm’s way because its tent material was found to be combustible. The Nassau County Fire Marshals returned to Revel on Wednesday, Aug. 18 ordering that their current outdoor dining tent and attached structure be removed.

Veneziale had asked Revel to work side-by-side with the village’s Department of Buildings and fire department to create a safe outdoor dining alternative that will follow state laws and be in compliance with other state and village codes.

Calogero’s, Waterzooi, and Novita were given an “Order to Remedy” by the village’s Code Enforcement officer to fix the current hazards with their outdoor dining structures and come in compliance within 45 days, giving them appropriate time to do so. The other three restaurants didn’t have the same road access blocking issues that Revel has. The three restaurants are currently operating without building permits, which are required for outdoor dining facilities.

Representing Revel at the meeting was their lawyer Steven Cohen, who said what he heard discussed among the board was factually incorrect.

Cohen said Revel received a draconian termination license agreement after 15 months of operating under three extensions that the village issued. Cohn said that Revel also had a building permit from the village to build the tent.

The meeting ended with the board voting to allow village Building Superintendent Giuseppe Giovanniello to reinstate the license based on compliance and with a new plan by Revel submitted.