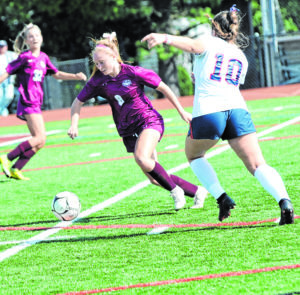 The first of two girls’ soccer seasons in 2021 ended in disappointment for Garden City. The Trojans lost a heartbreaker to MacArthur in the Nassau County Class A semifinal, as the to-seeded Generals scored in overtime.

Flash forward a few months and Garden City finds itself in a race for the top of Nassau Conference A1. On Oct. 2, it hosted South Side and settled for a 1-1 tie.

The hosts struck first. Kylie Brunning won a ball near the sideline, deep in South Side territory, and lofted a perfect pass to Maya Costa, who headed it past goalie Avery Testa. But the guests responded with 7:37 left in the opening half. Hannah Porter, from the corner, sent a crossing pass into the goal area. Keeper Marisa Patrissi, an eighth-grader, could not hold on and Sienna Connolly slammed the rebound home.

Garden City coach Mike Heedles switched midfielder Alivia Gordon to forward in the second half and it nearly paid off. On three occasions teammates created scoring opportunities, but she was stymied each time.

“[Gordon] has the ability to hold on to the ball [near the goal area] and use her body well to shield the ball,” Heedles said. “We had our chances today. I felt we were trying to sneak it through the middle too many times. Too many extra touches—and that’s where [South Side’s] backbone is, in the middle. If we had played the flanks a bit more we could have gotten a few more chances.”

Garden City beat South Side in the first round, 2-0.

“South Side is still the power in the division, but it’s kind of spread out more,” he said. “MacArthur has a had a lot of good years now. Manhasset is strong. The whole conference is tough. Everybody on a given day can beat somebody else.”

South Side regained a bit of its swagger this past year. In the pandemic-delayed soccer season, played in the spring, the Rockville Centre high school beat MacArthur to capture its first Nassau County Class A title in several years. It has one of the storied girls soccer programs in New York State, winning eight Class A state titles since 2000 and another eight Class B crowns in the ’80s and ’90s.

The Trojans’ losses came against MacArthur (2-0) and Manhasset (3-0), The latter was particularly bitter as Garden City dominated positionally, spending a large amount of time in the Indians’ territory.

“We had a couple of opportunities to get back in the game. We missed a couple of easy ones. It’s hard to come back when you miss those chippies,” Heedles said.

The playoffs are looming, and wherever they are seeded, the Trojans will face a familiar opponent, one that they will have tangled twice against in the regular season.

“If you beat them twice, then they are really after you,” Heedles noted. “Our biggest thing for us right now is to be healthy. That’s what we’re looking to do.”