Students have been participating in exciting activities through their German classes in the Garden City schools. Field trips and various classroom activities alike are providing engaging experiences that allow students to explore the German culture while strengthening their language studies.

At Garden City Middle School, Susanne Rupes’ sixth-grade German class created “Schultüten,” which is a traditional cone-shaped container that students in Germany receive on their first day of school going into first grade. The “Schultüten” is filled with back to school goodies like pencils, crayons and treats.

As Frau Rupes explained and students learned, the parade was named after Friedrich Wilhelm von Steuben, a Prussian-born General who served under General George Washington in the American Revolutionary War. The annual celebration recognizes the great achievements of German, Austrian and Swiss immigrants in the United States and brings together the entire German-American community through marching bands, musical groups, costume weavers, and representatives of various clubs and organizations wearing their traditional German costumes or Trachten.

After the parade, the students and their chaperones enjoyed ice cream treats outside the Guggenheim Museum and visited the Ancient Playground in Central Park. 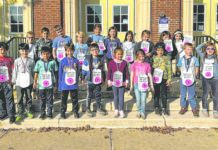