It is with great sadness and loss that the Mineola-Garden City Rotary Club mourns the passing of our most esteemed member, Maureen Clancy.

Clancy has been our treasure since she became the first woman to be admitted into the club in 1987 and subsequently the first woman president of our club in 1993-94. Her charm and gracious personality have endeared her to all who have had the good fortune to have known and worked with her throughout the years.

To regard Clancy as a pillar of the Garden City community is quite the understatement. A resident for 61 years, Clancy devoted her life to the village she so well loved.

Clancy’s village-wide achievements have included president of the EPOA, the Garden City Chamber of Commerce, and Garden City Historical Society. She served as the first woman to serve as a village trustee and deputy mayor, and had also served as a director on the Board of New York Community Bank and of NYU Winthrop Hospital. An active parishioner of the Church of St. Joseph, she had served on the Parish Council.

While Clancy remained involved in so many community activities throughout her 61 years as a resident, the Mineola-Garden City Rotary Club is most proud to acknowledge her support of our club’s many efforts, ventures and services. We particularly recognize her for her service to RotaCare, which our club created in 1992 and to which Clancy was active from the onset. She had served on the board and as secretary for nearly 30 years until her health dictated her retirement.

Professionally, she and her beloved husband, Cumin, who had predeceased her, had established Clancy and Clancy Brokerage in 1956 and she had been a licensed insurance broker since 1959.

As a reflection of her inspiring life, many of Clancy’s fellow Rotarians have expressed their warmest feelings for their beloved friend and colleague. Clancy has endeared herself to all who have known and worked with this remarkable lady. Both her Rotary and RotaCare friends, along with those throughout the village and beyond will sorely miss our beloved Maureen—agreed to be “one in a million.” 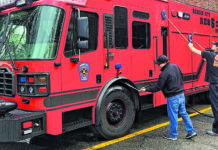